On Sunday morning 6 October 2019, after a memorial service in the church of the Presentation of the Virgin Mary at his native village of Kourkoumelata, family and friends attended the unveiling of a statue of the late George R. Vergottis. The monument was dedicated by the family as a reminder of the importance of solidarity and giving. The monument is hosted in the grounds of the Cultural Centre of the Vergottis Foundation, the Cultural Centre which George R. Vergottis was coming to inaugurate in August of 1965 when he suddenly died of heart attack in London.

Honouring the event with their presence were Metropolitan Demetrios, member of parliament P. Kappatos, Argostoli mayor T. Michalatos, former Leivatho mayor N. Frantzis, former Vice-Mayor for Cultural Affairs V. Kekatos, residents of the village of Kourkoumelata, Kalligata, Metaxata and Ntomata and three generations of Vergottis family members. After the unveiling all guests raised a glass in grateful memory to the national benefactor.

Attached (in GRE only) are the speeches before the unveiling. Click here 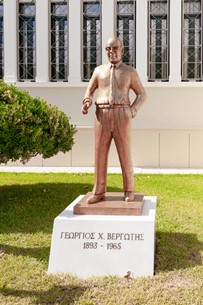